I spend many hours surfing the net for genuine posts from genuine people willing to give us the knowledge of their true paranormal stories but alas 99% of material I read is soooo full of crap and this is not fiction stories, it is lies within a story. It frustrates me to read the garbage that people make up. Why do they do it? I will never understand!

This is why many will not come forward with their true experiences, I can see the reason of them holding back, so sad!

People seem to just want a scare, but there are many of us want the truth, we want to hear the natural story of the actual experience.

If you want to be a horror fiction writer then keep to the websites that deal with this and not try to fake your story in being believed it is genuine. For the experienced the truth comes across as believable, you can read a story and see certain signs that will show this.

S.P.I. will support your story but if you lie to others then you lie to yourself.

We read, we investigate, we allow publishing on your honesty and not our judgement.

So knowing we are a genuine team who would genuinely like to read your own experiences why not come and join us and submit it for us to show others how events can change your life.

What on earth is going on in this era? People of today do not seem to react so much towards paranormal activity. It was very busy in the early 1900’s with many mediums trying to solve or contact ones who had passed. Maybe fear has a great part in this or is it the open pocket to make easy money maybe.

There are many places that openly advertise their location as a haunted venue, they have their own stories to tell of what or who haunts their dwelling. They actually make money on the so called fact of the so called haunted area by allowing people to rent it for the night at ridiculous prices. Now don’t get me wrong, I agree that there are many that enjoy the thought of a creepy made up ghost hunt, but many of these venues when approached by the experienced and professional teams want to charge them even higher rates to investigate. This type of investigation is an up-to-date and can be an ongoing record of who or what is within their building and is normally carried out for free.

I believe that most places are eluding the public by using old and passed down information about spirit activity . Even though this is classed as entertainment, (ghost hunt), it is still misinformed as to what is really meant to be within the venue.

Teams that offer to investigate fully and have the skills to work in the field of spirit activity are always willing to conduct a report on most venues, unfortunately the owners either want to charge unfair rates or just do not want to be investigated. To be charged to do an update on spirit activity when the service is free is bad enough, but when it is to show that the venue is telling the truth about their claim you would think they would welcome a report to show this. Oh dear, I think I have maybe found the excuse of not letting the investigation progress!

S.P.I. will never pay a venue to conduct a service. Our service is free, as should any venue in question be. The question of security is mostly used as an excuse but there have always been staff who are interested at the venue who would volunteer their free time.

No-matter how many investigations are conducted there is usually some kind of activity that is recorded. It might not match the owners’ records but it is what is recorded at the time of the investigation. As I say, activity changes over time so more the reason to have an update on the dwelling.

Really it is quite obvious that ghost hunting has taken over for making easy profits for the clubs that organize and the venue who stages. SOME are not interested in finding the real answers or truths, only what it is worth in money terms.

Such a shame for the professional teams, the records are lost or fabricated for many buildings and the chances of updating them are getting less likely, unless you are very wealthy and can afford ridiculous charges by the vendor. Maybe they think you are going to make money on them, this is because they have seen TV programs which have totally confused the public of what is truth and what is reality. Why do you think when these programs are advertised it has the caption of “Entertainment Only”, because most of the filming is just that.

Are there really some venue’s out there that are not corrupted?

Is there still a chance to show the professionalism of the real investigators?

Are there any vendors who can learn to trust these professional teams?

Is there a vendor who would welcome a free investigation for free access?

More to the point is there a vendor who would like regular investigations over a long period to answer many of their questions?

There is hope yet, so many lovely and beautiful places, so many stories, so many experiences but not enough up-to-date records.

If any vendor or owner would consider our offer we would welcome you as a respected client.

The team at S-P-I. Wait for the opportunity to show you our professionalism.

Ghost in a field.

OK as Gwyn will confirm, Im not a believer, nor a non believer, I do however remain open minded and I have experienced things that can only be described as “paranormal” in my past, but, I am not religious, so question – what are they?, multi dimensional? or time loops? or indeed “Ghosts”?, .. question remains for me, what are they..?
Anyway.. so … here is a interesting one.. I was walking the dog through a field with a friend today. For some reason I turned around and about 20 meters from us, in the middle of this field , was a man with a shirt and good trousers . In my mind I thought, ‘where did he come from?’, as I hadn’t seen him walk there. He was about mid thirties. He was stood still looking at us. My friend turned around also, I assumed she seen him. We both smiled and turned around and kept walking without discussing it. Probably only 5-10 seconds i felt I needed to look again, i turned around and he had vanished. The field was open , so unless it was Hussein Bolt, its unlikely he dived in a bush that quickly. I asked my friend , “where did he go?” .. to which she replied,, “who?”.. she had not seen him when we had both turned around. “Ghost” in a field that only I could see? I have no explanation…
just thought id share…

We talk to many people on our travels, we hear so much about individual experiences, yet still we find people do not contact us to help them until they have left the dwelling where they have had many spiritual events, or they have been too embarrassed to contact us.

Please spread the word that the small team at S.P.I. completely understand all situations to do with ghost or spirit activity and can truly professionally help you with all types of paranormal activity.

We do not judge any client and we will be very discrete with your situation.

Our work experience spans many years within this field of sometimes , very misunderstood phenomenon. We will arrange to meet our clients, normally at the venue in question to advise and discuss the experiences that are occurring. From this meeting we can advise what is needed to resolve the clients events. For a consultation please Contact us privately at spiteam44@gmail.com

It has always been difficult for people to know who to contact when this situation arises and more so who you can trust. Now you know there is a professional and experienced team here at S.P.I. and we never turn a client away.

Our investigation leads us to believe many different spirits pass through the three vortexes that dwell in this building. One was found at the fire place in front of the ladies toilet ( this is the newest). The second is to the right of the pool table. The third the oldest vortex is in the middle of the kitchen linking upstairs to a childs bedroom, lounge, stairway and office. This also links to the garden and out buildings creating many sightings and experiences.
We managed to establish many regulars which include two naval men, Jolly jack tar also known as Jack. He and his mate were fighting outside both were stabbed and died in the pub. They remain happy drunks causing mischief within the pub.
Strong heavy presence can be felt of a mother desperately looking for her daughter both are in the dwelling that can not see each other. The girl has a dark male spirit around her. Her name is Emily referred to as Lilly.
We also connected with a young Alter Server called William who stole money from the church and to avoid prison he ended his life ( between 17-1800’s ). He frequently liked a drink at what is now called The Dog and Partridge. Also a spirit of a man who claims to have been set alight, when he is around you may get the smell of burning.
Near the ladies toilets two Irish wolfhounds were seen walking about.
Tapping is often heard behind the bar. A WW1 RAF pilot pops in occasionally. 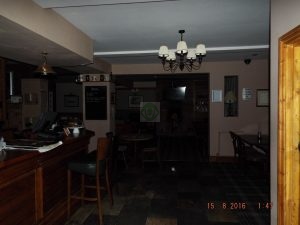 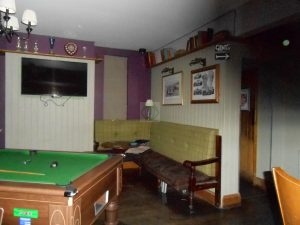 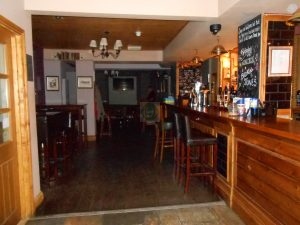 Find us on Google Plus